Reports are out claiming that Hannover 96 are battling Besiktas for Chelsea midfielder Marko Marin. 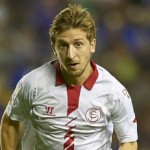 Besiktas president Fikret Orman has confirmed they’re “in talks” with the Germany international.

However, Hannover are also chasing Marin’s signature this week, according to BILD.

The Bundesliga club are in the market for two wide midfield signings and Marin is being actively pursued.

Chelsea Did Not Believe In Me! – Daniel Sturridge