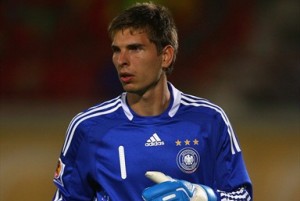 German side Hannover have agreed a deal for Manchester United goalkeeper Ron-Robert Zieler.

The German youngster has penned a two-year deal with the Bundesliga club.

Zieler, who has never played a first-team game for United since joining the youth team in 2005 and progressing to the senior ranks three years later, has spent several days on trial at Hannover.

The 21-year-old has done enough to impress goalkeeping coach Jorg Sievers and will move to the AWD-Arena in the summer as a free agent.

The former Germany Under-20 international has penned a contract until 2012, with the option of a further year.