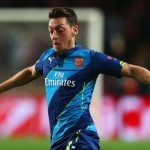 It has been reported that Mesut Ozil admitted it was hard to accept Arsenal’s exit from the Champions League on Tuesday night.

The Gunners performed admirably in defeating Monaco 2-0 in the Round of 16 second leg at the Stade Louis II but in the end came up short, losing on away goals.

The 3-1 defeat at the Emirates Stadium in late February cost Arsenal a spot in the quarter-finals and Ozil was quick to portray his feelings on Twitter.