It has been reported that Brazil goalkeeper Julio Cesar was at a loss to explain their humiliating 7-1 World Cup defeat to Germany. 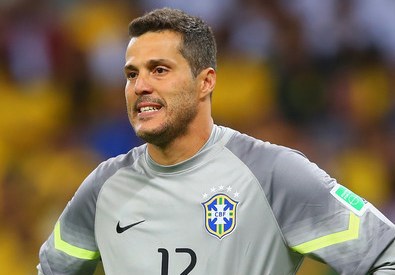 The 34 year old spoke to FIFA after the final whistle of a record-shattering World Cup semi-final in Belo Horizonte, the heaviest ever loss for a host nation.

“I think we should recognise the great football played by the German side. I believe everything was going well until now and was so beautiful.

“The entire Brazilian population was cheering us on, but we were unable to fulfil their dreams. Now everyone will talk, apologise and ask for forgiveness. We have to acknowledge it’s an incredibly heavy defeat.

“It was a black-out. Nobody expected this. Now we will go home to our families and embrace them. We apologise to the Brazilian fans, but we can do nothing else.

“I recognise I made mistakes and take on my share of the responsibility. I had prepared for this tournament for many years.

“I honestly would’ve prefered to lose 1-0 with my howler than to suffer a defeat like this. We’ve all been through tough times, but I thank God for giving me the chance to play the World Cup in my home country. I am grateful for that.”