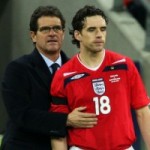 He is due to make his return in a reserve match against Burnley in Altrincham tonight, having spent 18 months out of the game with tendinitis in both knees.

Now 29, Hargreaves is still unsure of how his knees will stand up to competitive football but remains optimistic that he can play again at the highest level.

“The World Cup is an incentive. Absolutely. But I need to see progress now, pretty quick, for the World Cup to become even a realistic option,” he told the Daily Telegraph.