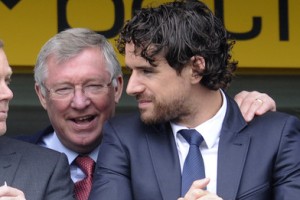 It has been reported that Hargreaves is due on United’s pre-season tour of America and Mexico in July.

But before that he wants to know the extent of Ferguson’s part in him being left out of England’s 30-man World Cup squad – after initially being named in it.

And also why he was not even given a sub’s spot for the club’s final game of the season at home to Stoke.

He had come on as a sub, though only for a minute, in the penultimate game with Sunderland.

Hargreaves stormed away from Old Trafford 50 minutes before kick-off against Stoke after discovering he was not in the squad.

The ex-Bayern Munich midfielder, capped 42 times, had hoped to play some part in a bid to prove to England coach Fabio Capello he was fit to be named in his initial squad.