Reports are out claiming that Tottenham striker Harry Kane has spoken of his wonder goal in their 2-2 draw with Arsenal. 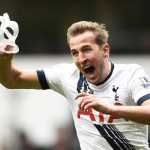 The England international star continued his own fine form against Arsenal, scoring his fourth goal in three league games against the north London rivals in spectacular style, curling a strike from the left-hand edge of the penalty area past David Ospina and into the far corner.

“Dele and I were chasing the ball down, he got there first and managed to do a lovely little backheel,” he said. “I felt I was on my own, got the ball out of my feet and just thought ‘why not’?

“As soon as I hit it I see it going towards that far corner, to see it go in caused a lot of emotions.

“We’re disappointed but we’ve got to move on, there’s a long way to go.” Arsenal Not Interested In Sending Jeff Reine-Adelaide Out On Loan