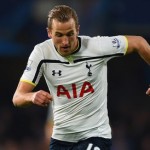 Reports are out claiming that Tottenham striker Harry Kane insists they fear no-one in the Premier League.

The England U21 international has warned Manchester United and Chelsea that Spurs have shaken off the fear factor.

The 21-year-old admitted: “Mentally, we were beat before we stepped out on to the pitch when we were up against a bigger-name team. This isn’t the case anymore.

“Even so, let’s not kid ourselves – they’re still tough games. We still have to perform on the pitch, and that’s what we’re looking to do, starting with our next two games against Manchester United and then Chelsea.”