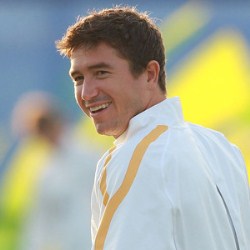 Interesting news are out and it has been revealed that Australian club Sydney FC is chasing Australia international Harry Kewell for the A-League next season.

The 32-year-old attacker, Australia’s first world class player, is set to end his stint with Turkish club Galatasaray and his manager Bernie Mandic is entertaining offers.

Sydney FC chief executive Dirk Melton told the Sydney Morning Herald : “Any successful Socceroo who is interested in returning to Australia, be it Tim Cahill or Harry or whoever, will be of interest to us, and Harry is one of the most successful of all time,”.

“Whether it’s the right time for him remains to be seen but we need to show respect to our fans and Harry in that if he decides to come back to Australia, we’ll put our case forward.”

“Every club that has expressed an interest in Harry has been told exactly the same thing at all times,” Mandic told the paper.

“‘You are welcome to make an offer but keep in mind that the next move Harry makes will not be to a club offering the best financial offer. The key to any deal is the environment for his family’.”