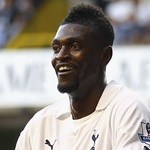 It is now said that the on loan Manchester City striker is likely to miss their clash with Newcastle United this weekend.

He told Sky Sports News HD: “He has got a bit of a hamstring. He played on with it last week. He did it in the first half against Arsenal and he played on, which is not easy. He did have a tear. It’s touch and go for him really.

“It’s a dangerous one. If he tears it badly, he has got a grade one tear if he makes a real mess of it and he could be out for six or seven weeks.

“It’s a difficult one to risk him, but we will see how he feels. We will give him a couple of days yet, keep treating him and hopefully he could be okay.