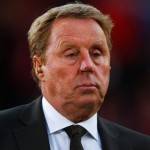 Redknapp has been impressed by Arsenal in preseason.

He told talkSPORT: “It’s going to be tight this year but I’ve got a feeling for Arsenal.

“I’d rather see Tottenham! But I’ve just got a feeling Arsenal might come strong this year, if Arsene [Wenger] keeps his players fit, people like [Jack] Wilshere and [Theo] Walcott.

“Last year they weren’t far away and had lots of injures and lost key players. This year they could go close.”