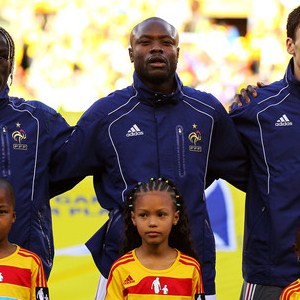 Sensational news are out and it has been reported that Tottenham Hotspur manager Harry Redknapp has confirmed that William Gallas is on the brink of joining the club, describing the signing of the former Arsenal captain as a “no-brainer”.

The French international defender left Arsenal on a free transfer in June having failed to agree a contract extension with the club he joined from Chelsea in 2006.

The former Chelsea defender made 145 appearances for the Gunners, scoring 17 goals.

“He’s a no-brainer on a free transfer,” Redknapp said. “He’s never asked for big money here. The chairman’s agreed a one-year contract with him and the wages are more than reasonable.

“He’s done nothing wrong. What’s he done wrong? He’s not the first player to go from Arsenal to Tottenham or Tottenham to Arsenal. It happens all the time. He won championships and all sorts at Chelsea.

“He’s a great lad as well, smashing fellow. I’ve been absolutely really impressed with him. He’ll improve Tottenham and that’s all I’m concerned about. He wants to come here and play and I think that shows the character. He could say, ‘I played at Arsenal; I daren’t go there’. He’s got the bottle to want to come and play here.

“I don’t think his attitude’s ever been questioned. The only problem he has, he gets annoyed with people at times – they tell me – who are not as professional as he is, which is not a bad thing. That can’t do any harm.

“He wants everybody to be as professional and want to win as much as he does. If he can bring that to this team as well, that’ll be a good bonus for us. Whenever we’ve played against him over the years, I’ve always thought he was a world-class defender.”