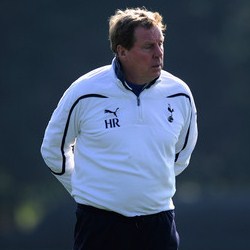 Tottenham manager Harry Redknapp is keeping his fingers crossed for a favourable draw in the Champions League quarterfinals.

The former West Ham and Portsmouth manager has conceded that his side could make the final but is wary of drawing Barcelona in the next round after they produced a football master class to see off Arsenal.

“I thought it was an amazing performance from Barcelona to beat a team who plays who are probably the best passing team in league.

“To make them look so ordinary was amazing last night.

“It will be difficult for anyone to beat Barcelona.

“They are an amazing team, but who knows.

“We are in the last eight and we have done well to get where we are and we want to stay in this competition and go as far as we can.”

Adebayor : I Know Tottenham Fans Will Love Me!