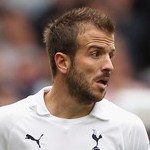 The former Real Madrid forward, who prefers to play behind a main striker, was quoted in the Dutch press last week saying he had been left ‘irritated’ by the situation, but Redknapp revealed that the 28-year-old had approached him to say the comments had been misunderstood.

“Rafa came to see me and said to me he didn’t know where all that rubbish came from,” Redknapp said.

“Rafa is a great lad. I’ve not got a problem with him. He is a bright, well-mannered, fantastic footballer.

“He played there (on the wing) last year for us, probably seven or eight games and we had some great results. Some of our best results came that way.”