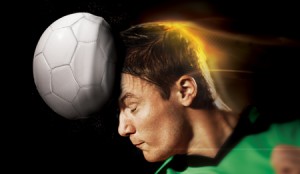 A new study finds that football players who repeatedly engage in “heading,” hitting the ball with their heads, may suffer brain damage even if they never get a concussion. Researchers looked at brain scans of 12 professional football players and found damage resembling that of patients suffering from mild traumatic brain injury, the Los Angeles Times reports.

While 40% of concussions in soccer occur when players collide, just 13% are a result of “heading,” and football players have been found to be at a lower risk for suffering concussions in general when compared to other athletes. This study could be important, then, because it focused on “sub-concussive” injuries and looked only at players who had never suffered a concussion. However, “the origin of these results is not clear,” says the senior study author, which means that though “heading” could be to blame, the injuries could also have been caused by hitting the ground, goal posts, or other players.