Hector Bellerin has declared that Arsenal feel they can beat anyone on their day. 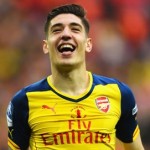 The Spanish full back made 30 appearances last term, playing an important role as Arsène Wenger’s side won the FA Cup and secured a third-place Premier League finish.

He told Arsenal Player: ‘The team really feel like we can beat any team in the world with the performances we’ve had, so we’re all really, really excited to hopefully start the season with the right mindset and with the right results. Hopefully by the end of next season we can win some more trophies.

“We need to start with the confidence that we finished this season with. That’s going to important for us, to keep pushing and start where we left off at the end of last season.”