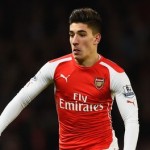 It has been reported that Arsenal defender Hector Bellerin was pleased with the cleansheet in their FA Cup win over Hull City.

The Gunners shipped two early goals when they last faced Hull City in the competition – at last year’s final – but this time scored twice and kept a clean sheet to progress to round four.

“We were very solid at the back so we weren’t scared at any moment,” Bellerin told Arsenal Player.

“The team defended really well and then we were confident when we went forward and created our chances. We got two goals and it was a really good performance by the team.

“It’s good because we had two young players at the back as well. It’s good that we can show as well that we can defend and that the team can still be really secure with us there.

“We need to defend from the front and everyone was trying to get the ball as soon as possible, and I think the team did that really well.”