Reports are out claiming that Arsenal fullback Hector Bellerin hailed the manner of their 2-0 win over Stoke City. 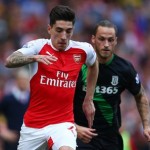 The Gunners moved up to third in the table with a 2-0 win against Stoke City on Saturday, following goals from Theo Walcott and Olivier Giroud.

“It is nice to get the first win at home finally,” Bellerin told Arsenal Player.

“It was a tough game and we had a lot of chances in the first half.

“Sometimes when you don’t score you can pay for it, but even when we had scored we were keeping tight at the back and defending properly. In the second half we got our second reward but I think we should have got it earlier because we had a few chances.

“The team kept trying as we got the second goal and we were happy to get the win. I think the chances are coming. We were playing with the ball but we needed that creativity up front to convert the chances.

“Finally we look like we are getting there but we need to be more efficient. We need to get the same efficiency we got last season to get back to those ways.”