It has been reported that Arsenal right-back Hector Bellerin is not expecting any new arrivals at the Emirates Stadium during the January transfer window. 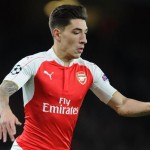 The Gunners have been tipped to be active in the transfer window following the long-term injury to midfielder Francis Coquelin and even manager Arsene Wenger suggested that he could dip into the transfer market.

But young Spanish defender Bellerin doesn’t think that there is any need for any new faces in North London.

“There is a lot of quality in the team and I do not think we need any new players,” he told IBTimes.

“If someone comes in he will be welcomed. But I think we have a very strong squad, with good replacements for every position.

“The players just have to think about the coming games and nothing else.”