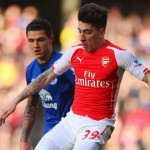 Reports are out claiming that Arsenal defender Hector Bellerin is set to land a new deal.

The Daily Mail says t he Gunners want to tie the right-back down to a new long-term deal after a string of impressive displays in replacing the injured Mathieu Debuchy.

Bellerin’s current deal expires in 2017, but he is now set to extend his stay at the Emirates Stadium.

The news casts further doubt over Carl Jenkinson’s career at the Emirates Stadium. The fullback is currently on-loan with West Ham United.