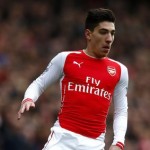 Arsenal defender Hector Bellerin says they welcome the chance to bounce back from their Champions League humiliation.

The Gunners host Everton at Emirates Stadium on Sunday, four days after losing 3-1 to Monaco in the Champions League.

“That’s the good thing about football, that straight away you get the chance to play again, show people it was an accident and bounce back,” the defender told Arsenal Player.

“I think we just need to focus on that game, play the best we can, be united and hopefully be on the same run we were on before.

“Everton have got a lot of good players, especially up front like Romelu Lukaku and Kevin Mirallas. They’re really good players with good technique and they’ll score goals so we need to be careful.

“It’s going to be a hard game because they need points that they’ve missed throughout the season. We know they’re going to go 100 per cent.”

Gervinho Attracting Plenty Of Interest From The Premier League