It has been reported that SC Heerenveen defender Jerry St Juste is aware of interest from Manchester United. 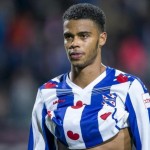 United manager Louis van Gaal is having the youngster scouted this season.

“I have read about it, but I’m not doing anything with it. I just do my best. That’s the important thing. What should I do with it?

“There are always people in the stands and there is always someone watching you,” he told Helden.

St Juste rates United “a nice club”, “but then so is Barcelona.”

On being likened to Real Madrid defender Raphale Varane, he adds: “This also provides me no extra pressure. But it may be that people expect more of you. I think its just beautiful.

“Is this not what you want?” Man Utd Change Venue For Pre-Season Game In The US