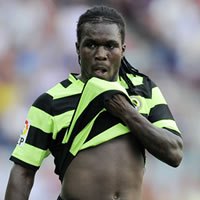 It has been revealed that Real Madrid wing-back Royston Drenthe needed a police escort to make his way through Altet airport in Alicante.

It is said that the Dutch international defender was spotted by Hercules fans, who immediately started abusing hurling abuse at the player.

The on-loan wing-back has infuriated both fans and Hercules management over his decision to ‘strike’ as he waits to be paid by the club.

Marca says cries of “shameless” and “stingy” could be heard from fans as Drenthe was ushered through the terminal.

Liverpool Prepared To Sign Nuri Sahin On A Permanent Basis