It has been reported that Hernan Crespo is of the belief that Fernando Torres will be more of an asset to AC Milan than Mario Balotelli was. 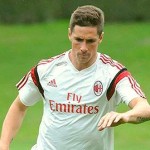 The Spanish international striker joined the Rossoneri on a two-year loan deal from Chelsea in the summer transfer window which occurred after Balotelli departed for Liverpool.

Argentine great Crespo, who played for both Chelsea and Milan, suggested that Torres will bring with him to the San Siro a form of consistency that Italian firebrand Balotelli was never capable of.

“I think that the Spaniard is the perfect attacker for Pippo (Filippo) Inzaghi’s side,” Crespo told the Gazzetta dello Sport.

“Especially when you look at the Milan midfield.

“Balotelli is a champion who can change the game with one piece of skill, but you can’t ask consistency from him.”

Torres will get the chance to make his debut for AC when they take on Parma in their second Serie A fixture this weekend.