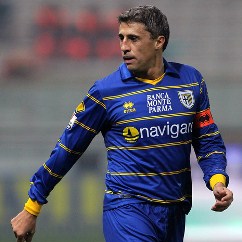 Hernan Crespo has declared that he will leave Parma at the end of the season.

The former Inter Milan and Chelsea striker has confirmed that this will be his last campaign in Serie A.

“This is the season of my goodbye,” said the 36-year-old.

“In June I’ll quit playing football at the highest level.

“I will almost certainly be leaving Italy, but until then I will continue to work hard because I like doing that.”