It has been reported that Ander Herrera is determined to continually produce top-class performances for Manchester United. 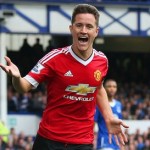 The Spanish midfielder was one of the stars of the show as the Red Devils defeated Everton 3-0 at Goodison Park on Saturday, scoring his side’s second goal and providing the assist for Wayne Rooney for the third.

After the match, Herrera spoke of his performance and how he yearns to consistently play at this level as he strives to be one of his club’s most important contributors.

“I have trained really hard in these two weeks,” he told the club’s official website. “I wanted to play as soon as possible and the manager gave me the chance. I enjoyed the chance he gave to me and I want to keep helping the team. I am a team player and when I play I will do my best.

“I think people are happy with me and they value me because I always try to give everything for the team. I am really proud because I am at Manchester United and I will try to do my best to establish myself in the first team.”