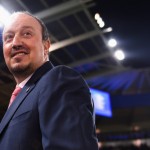 Heskey, whose departure from Anfield back in 2004 coincided with the arrival of Benitez, believes that the Spaniard’s expertise in shape and formation will help the Magpies in their relegation battle.

Heskey told the Daily Express: “Having seen and spoke to the players while he was there (Liverpool) at the time he likes to concentrate on shape and forcing people to understand how he wants them to play – to the point where you do hours and hours of shape.

“Which is good in my eyes, because when you go on the pitch it’s second nature so you know everything about the way he wants you to play.

When asked if Rafa was the right appointment at St. James’ Park, Heskey added: “It’s difficult to say – if he’s kept them up then yes.”

The Magpies are currently one point away from safety with nine games left in the season following Monday night’s 1-0 loss to Leicester City in Benitez’s first game in charge.