Reports have emerged claiming that England manager Roy Hodgson has praised the efforts of Arsenal’s Kieran Gibbs and Tottenham’s Kyle Walker following the Three Lions’ 3-0 win over Lithuania in Euro2016 qualifying on Monday. 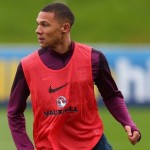 Gibbs and Walker started in the full-back positions in place of Liverpool’s Nathaniel Clyne and Southampton’s Ryan Bertrand, who featured in Friday’s 2-0 win over Estonia.

Hodgson said the performances of Gibbs and Walker, especially in the absence of injured defenders John Stones and Luke Shaw, illustrated England’s depth in the full-back position.

“But we think we will get Stones back, even for the November fixtures.

“And for Luke, all we can do is keep our fingers crossed that he recovers quicker than can possibly be expected and that it is not too late for him for next summer, because he is a very, very exciting talent and a left-back who would certainly cause a lot of competition in the squad were he to be fit.” Arsene Wenger On Olivier Giroud : We Will Deal With It Internally!