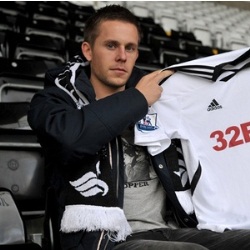 Bad news for all Swansea City fans as the club is set to face a battle to keep hold of on-loan Hoffenheim winger Gylfi Sigurdsson.

Kicker has reported that Hoffenheim want to take him back to Germany.

The report revealed that Hoffenheim have already received enquiries about the availability of Sigurdsson from clubs across Europe interested in signing him in time for next season.