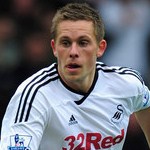 Reports are out claiming that Hoffenheim are ready to sell Gylfi Sigurdsson to Swansea City.

According to BILD, the German club has agreed to sell the Iceland international to Swansea for €9 million.

Sigurdsson has also attracted interest from Manchester United and Arsenal, but Swansea appear all set to close a deal for Sigurdsson.