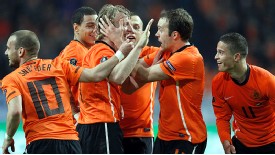 Dirk Kuyt’s late brace eventually settled a topsy-turvy encounter in the hosts’ favour after the Hungarians – beaten 4-0 in the reverse fixture in Budapest on Friday – twice fought their way back into the game.

Robin van Persie’s early strike gave the Dutch a half-time advantage but goals from Gergely Rudolf and Zoltan Gera turned the game on its head.

Gera equalised again after goals from Wesley Sneijder and Ruud van Nistelrooy had got Holland back in front, before Liverpool striker Kuyt had the final say to move Bert van Marwijk’s side onto 18 points from six games.