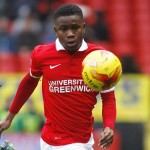 He told Sky Sports: “Charlton will do well to keep Ademola Lookman in the summer.

“He’s going to be a sought-after commodity. The vultures will be circling around him. He reminds me of Joel Campbell at Arsenal. It wouldn’t surprise me if Arsene Wenger is interested.”