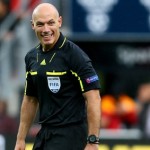 It has been reported that former referee Howard Webb feels that there was nothing wrong with Hector Moreno’s tackle which caused a double leg fracture to Luke Shaw.

The clash between PSV Eindhoven and Manchester United on Tuesday night was marred by the horrific leg break suffered by 20-year-old Red Devils defender Shaw.

The England international star suffered the blow in a strong challenge from PSV defender Hector Moreno and the United camp have understandably been furious at the Mexican defender for the tackle.

While many feel that Moreno should have been severely punished for the tackle, former referee Howard Webb says that the challenge was a clean one and that Shaw was simply unlucky to have sustained the injury.

“Luke Shaw’s injury was awful and I wish him a speedy recovery. But I have got to say that the referee made the right decision on the night,” said Webb.

“Moreno stretches with his right leg, which plays the ball cleanly. His left leg makes some contact on the follow through, but it is always tucked away under him and not aimed towards Luke Shaw.

“Luke is unlucky in that he gets his studs caught and twists, which causes the injury, but on the night, I think the referee made the right decision.”