Reports are out claiming that Hugo Keto has helped the Arsenal U18’s advance into the quarter finals of the FA Youth Cup with his penalty shoot-out heroics. 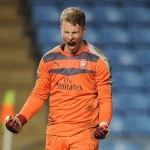 The Gunners youngsters claimed a penalty shootout victory over Coventry City following a 2-2 draw during the regulation period at the Ricoh Arena and the man who played the most integral role in the victory for the was goalkeeper Keto.

Tyrell Robinson ad Donyell Malen got the goals for Arsenal but it was Keto who produced a host of quality saves throughout the match, before the Finnish youngster went on to deny the likes of Dan Smith, then Jacob Whitmore and finally Ronee Hendricks from 12 yards during the penalty shootout.

Arsenal will now meet Liverpool in the final eight at home on February 27.