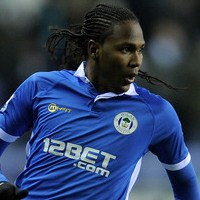 It has been confirmed that Fulham have completed the signing of Hugo Rodallega on a free transfer from Premiership rivals Wigan.

The Colombia international striker had reportedly also drawn interest from Everton and Aston Villa, and admitted he had hoped to remain in England.

“I wanted to stay in England and I’m delighted that I now have this opportunity with Fulham.

“I would like to thank the staff and fans of Wigan Athletic for three and a half wonderful seasons there.

“I’m looking forward to pre-season training with the rest of the Fulham squad and starting a new chapter in my career.”

Moussa Dembele On The Verge Of Joining Tottenham