Arsenal recorded a routine three goal victory over Hull City to extend their lead in the race for fourth place to four points. 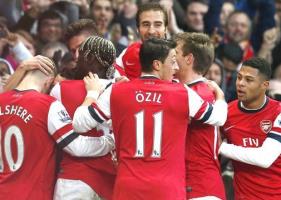 Aaron Ramsey scored his sixth away goal of the season and Lukas Podolski continued his rich vein of form by notching a brace, his fifth goal in five games, to seal victory for Arsene Wenger’s side.

Hull City may have been the better side in the first-half but Arsenal’s proficiency in front of goal proved to be the difference.

Ramsey opened the scoring on 31 minutes when he completed a vintage Arsenal move latching onto Santi Cazorla’s through pass and smashing the ball past Steve Harper in City’s goal.

There was a hint of controversy surrounding Arsenal’s second goal after Nikika Jelavic fell under Mikel Arteta’s challenge in the build up but there was no questioning Podolski’s finish after he caught the ball superbly on the half volley to double his side’s advantage.

Podolski added Arsenal’s third nine minutes into the second-half after Harper initially saved a shot from Ramsey with his feet but the rebound fell kindly to the German international who tapped home for Arsenal’s third.

With so much at stake for the visitors the pressure may have got to Wenger’s side but they put in an impressive performance and it now looks as though they will claim yet another fourth place finish.

Hull City are not safe just yet despite experiencing their best season ever but one more win should ensure another campaign in the Premier League.

Arsenal Midfielder Mesut Ozil Could Be Playing For Barcelona