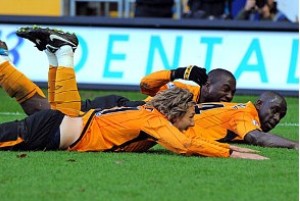 Hull manager Phil Brown breathed again as Seyi Olofinjana and Jan Vennegoor of Hesselink fired his side to a priceless win over 10-man Stoke.

The struggling Tigers had been heading for yet another damaging Premier League defeat – and Brown possibly for the sack – after Matthew Etherington’s first-half strike at the KC Stadium.

But Hull were rewarded for their greater endeavour as Olofinjana levelled against his former club and substitute Vennegoor of Hesselink won it in the final minute, moments after Abdoulaye Faye was sent off.

Hull had looked a different side for the presence of record signing Jimmy Bullard, making his long-awaited home debut after 10 injury-ravaged months.