It has been reported that Hull City boss Steve Bruce wants to keep hold of striker Matty Fryatt. 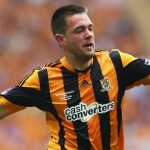 The Hull Daily Mail claims that a new contract offer has been tabled for Matty Fryatt, but confirm Robert Koren and Abdoulaye Faye have played their final games.

The two heroes of last season’s promotion out of the Championship have struggled to hold down a place in the Premier League and, predictably, have been told they are free to leave the KC.

Left-back Joe Dudgeon, 23, will be offered a six-month extension after only making two appearances in 19 months due to a knee injury.