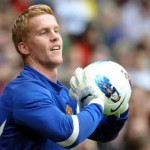 It has been reported that Hull City are eyeing Manchester United goalkeeper Ben Amos.

The People reported that the one-time Tigers loanee stopper has fallen down the pecking order at Manchester United since the Red Devils signed Victor Valdes, and Amos’ contract expires at the end of the season.

The 24-year-old had a brief six-month stint at the KC Stadium from July 2012 to January 2013, making 19 appearances in all competitions.

United will not stand in the way of Amos, should an offer come in for the goalkeeper.