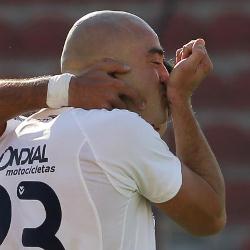 Velez Sarsfield won the Argentina Clausura championship with a match to spare after a 2-0 away win over Huracan.

Uruguayan striker Santiago Silva headed Velez into the lead six minutes after halftime in a match played behind closed doors because of a ban on spectators at Huracan’s Duco stadium after crowd trouble three weeks ago.

Substitute David Ramirez converted a late penalty for his eighth goal of the championship as Velez’s top scorer after team mate Sebastian Dominguez and Huracan defender Facundo Quiroga were sent off in the 75th minute for fighting.