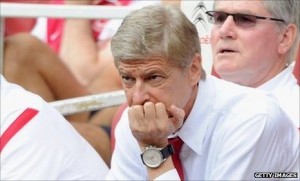 Arsene Wenger believes that his old adversary José Mourinho would be a “good solution” for Chelsea in the summer as he expressed fear that the Stamford Bridge club are primed to make an expensive and dramatic statement with their transfer business.

Mourinho has emerged as the manager that Chelsea most want to succeed Rafael Benítez, who will depart at the end of the season after his interim spell, and soundings have been taken to gauge the Portuguese’s willingness to make what would be an eye-catching return.

“I’m afraid of what Chelsea can do in the summer,” Wenger said. “We have to be prepared for them to be one of the biggest movers in terms of investment once the window opens.

“Even though they already have a great base to their squad, notably their young players such as Oscar, Juan Mata, Ramires and Eden Hazard, I think they will be busy during the transfer window. We’ve heard a lot of talk about Falcao. Some people say it’s already a done deal but I’ve heard nothing.”

Wenger clashed notoriously with Mourinho during the latter’s time in England but he suggested that Chelsea would benefit from taking him back, as there is no doubt about his talent.

“I think Chelsea currently have a great coach in Rafa Benítez,” Wenger said, “but if they part ways at the end of season, of course José Mourinho would be a good solution for Chelsea. Mourinho is one of the best in the world. I consider Benítez to be doing a good job at Stamford Bridge but, honestly, I’m not really well informed about the possibility of Mourinho returning to Chelsea.”