It has been reported that former Liverpool boss Brendan Rodgers says he’s out of the running for the Manchester United job. 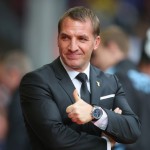 Rodgers has been spending his time out of work attending matches all over the world.

He is keen on a return to management, but admitted that his history with United’s rivals Liverpool has virtually ruled him out of taking over from Louis van Gaal, should he be sacked.

Rodgers, speaking on TalkSPORT, said: “I think if you manage Liverpool then the Manchester United job’s gone.”