Arsenal midfielder Aaron Ramsey has admitted that he could have been a rugby star. 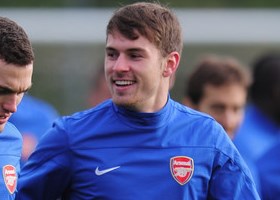 The Wales international was invited for trials with Newport Gwent Dragons — not to mention St Helens from rugby league.

The 22 year old told the Daily Mail : “I like to think I would have made it if I’d chosen rugby,”.

“I started off playing rugby league as well as union. I switched between fly-half and wing but I preferred to play fly-half. I liked to be at the heart of everything. I liked to be involved.

“I was a good reader of a rugby match. I could kick, too. Playing football obviously helped me with striking a ball, and I enjoyed the physical side of it. I think that has helped me overcome my injury problems but out there on the rugby pitch I liked things to come through me.” Arsenal On The Right Train Going The Right Way – Wenger