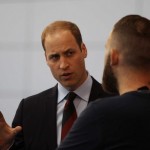 Reports are out claiming that Prince William has revealed that he could have experienced much more as a football supporters if he made a difference choice when he was at school.

The Duke of Cambridge told Gary Lineker in an interview for the BBC that his school mates were all Chelsea and Manchester United fans but he opted to go with Aston Villa in order to be a bit different.

“I didn’t really want to follow the run of the mill teams, and I wanted to have a team that was more middle of the table, that could give me the more emotional rollercoaster moments – to be honest, now looking back, that was a bad idea [laughs]. I could have had an easier time,” he said ahead of Villa’s FA Cup final meeting with Arsenal on Saturday.

“Aston Villa has always had a great history. I’ve got friends of mine who support Aston Villa, and one of the first FA Cup games I went to was Bolton v Aston Villa, back in 2000. It was a semi-final, which sadly Villa then went on to lose against Chelsea.

“But it was fantastic, I sat with all the fans, I had my red beanie on, and I was sat with all the Brummie fans and had a great time. It was just the atmosphere, the camaraderie, and I really felt that there was something I could connect with.”

Jose Mourinho Delighted With The Signing Of Kurt Zouma