Reports are out claiming that Arsenal midfielder Jack Wilshere intends to continue with his forceful attacking play, despite the resulting injury problems. 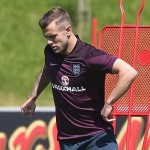 The 23 year old England international said: “When I was injured I read a few people who said that. I thought maybe they are right, maybe I should change it a little bit.

“As soon as I came back on my first game naturally I wanted to pick up the ball up and run with it, I can’t change that. I can work on a few things maybe.

“You look at your best dribblers in the world – Messi, Iniesta – they keep the ball very close to them so maybe that’s something I can work on but I definitely won’t be changing my game.”