It has been reported that Spain coach Vicente del Bosque says Chelsea striker Diego Costa was omitted from his squad in a pre-planned decision. 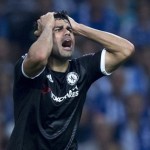 Del Bosque says the omission had nothing to do with his behaviour against Arsenal.

“He can’t play the first game and we preferred not to bring him. He isn’t playing badly, we’ll count on him in the future if everything goes well. Cesc Fabregas Amazed By The Improvement Of Neymar