Arsenal goalkeeper Lukasz Fabianski does not think he has anything to prove and has insisted he is just trying to help the team. 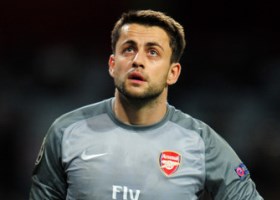 The 28-year-old Poland international is expected to leave Emirates Stadium, having joined the club from Legia Warsaw in 2007.

Fabianski deputised for the suspended Wojciech Szczesny in the second leg of Arsenal’s UEFA Champions League last-16 tie against Bayern Munich on Tuesday, and saved a late penalty from Thomas Muller as the game finished 1-1.

He told Arsenal Player: “I don’t think I have to prove anything”.

“Like I have said many times, I am just enjoying the games and trying to help the team in every situation they expect me to help.

“With the penalties, it is either you get it or not, and I was lucky so I am pleased with that.”

The Gunners lost to Bayern on away goals at the same stage last year but managed to build on a 2-0 win at the Allianz Arena to enjoy a great run of results in the Premier League.

“Hopefully it will give us the same as it gave us last season where we went on a really good run,” said Fabianski.

“I think [the confidence from this performance] is crucial for every player. All the players were disappointed we couldn’t get the result we wanted but on the other hand they didn’t beat us.

“Maybe the first half was more for them but the second half I think they had chances, we had chances and it was more open. I think you could see they were nervous until the last few minutes of the game so you can see that we showed our pride. We are looking forward to the final games of the season.”