Reports are out claiming that Arsenal boss Arsene Wenger played down his ruck with Chelsea rival Jose Mourinho during defeat at Stamford Bridge. 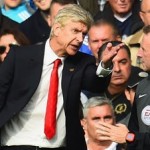 Eden Hazard, with a first-half penalty, and Diego Costa, with his ninth goal in seven league games, struck as Wenger’s bid for a first win against a Chelsea side managed by Mourinho goes on.

The Frenchman’s frustrations boiled over after Gary Cahill’s tackle from behind on Alexis Sanchez in the 20th minute, when he pushed Mourinho in the chest as he strode towards the Chile forward.

Asked if he regretted the managers’ long-running feud turning physical, Wenger said: “No. What is to regret after that?

“I wanted to go from A to B and somebody confronted me in between without any sign of welcome.

“B was Sanchez, to see how badly he was injured.”

Mourinho told the Frenchman to “back off” as the Gunners boss firmly planted two hands on the Portuguese’s chest – risking Football Association disciplinary action – and the pair also eye-balled each other in close quarters.

“Honestly I don’t listen to what he says,” Wenger added.

“Look I trust you that you (the media) will teach me all the moral lessons over the next three weeks. And I can accept that.”

Wenger admitted it was a push, saying “a little one”.

He added: “I can try to push you. You can see when I really try to push.”