Chelsea boss Jose Mourinho has declared that he doesn’t need a public vote of confidence from club owner Roman Abramovich. 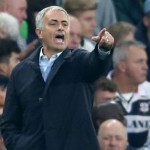 The 52-year-old, who was reappointed in June 2013 and signed a new four-year contract in August, insisted no alternative offer could persuade him to leave Stamford Bridge.

He insists Chelsea have learned from the managerial hirings and firings of Abramovich’s 12-year ownership and does not believe the Russian should speak out in support for the first time.

“The owner’s profile all over these years of not speaking is fabulous. I would love to do the same,” said Mourinho, who declined to say when he would next see Abramovich, who was at the defeat to Southampton.

“The owner has that privilege. I don’t think the owner needs a word, not even the club, the board, nobody. Not at all.

“When I was contacted to be back, I was told we had so many managers, we know you are the best.

“Three months ago we were all together in the bus with the cups. I think it’s time for all of us to be together now in the bottom of the league.”