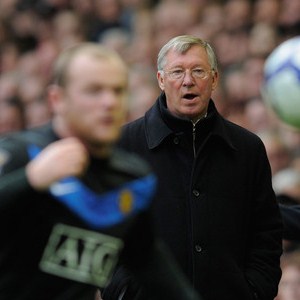 Sir Alex is all fired up for the Manchester derby this monday.

“It doesn’t matter what people say outside of the club; it’s about what we think inside the club, about what we have achieved,” said the United manager.

“The important thing is to win Monday’s game. It’ll be a big game for City – they’ll want to come and derail us for a spell.

“But we are at home. Our consistency in the league is there for all to see, and I expect us to perform really well.”

Ferguson is well aware City will go into the Old Trafford derby determined to delay the countdown to United’s 20th championship. His team need only 10 more points from their eight games to make sure the championship moves back across town. Such is their advantage that they can even afford to lose the derby and three other matches.

After City completed the ‘double’ on their way to the title last season, Ferguson wants United – 3-2 winners at the Etihad in December – to do the same and reclaim local bragging rights while giving City no hopes about any late stumble. “We have still got to win the title,” he said.

“We have eight games left. That’s 24 points to play for. The way we have approached things is the correct way and that is just to win the next match. Hopefully, it takes you to winning the league and then we talk about what the season has been like.

“The derby challenges are far more important than they were years ago. Hopefully, though, we will be ready for it.

“There will still be a great intensity about the game. It’ll be captivating. It’s being shown all over the world. It’s a Monday night match and it’s the only game. That does seep into the fabric of what the game will be like for both sides.”